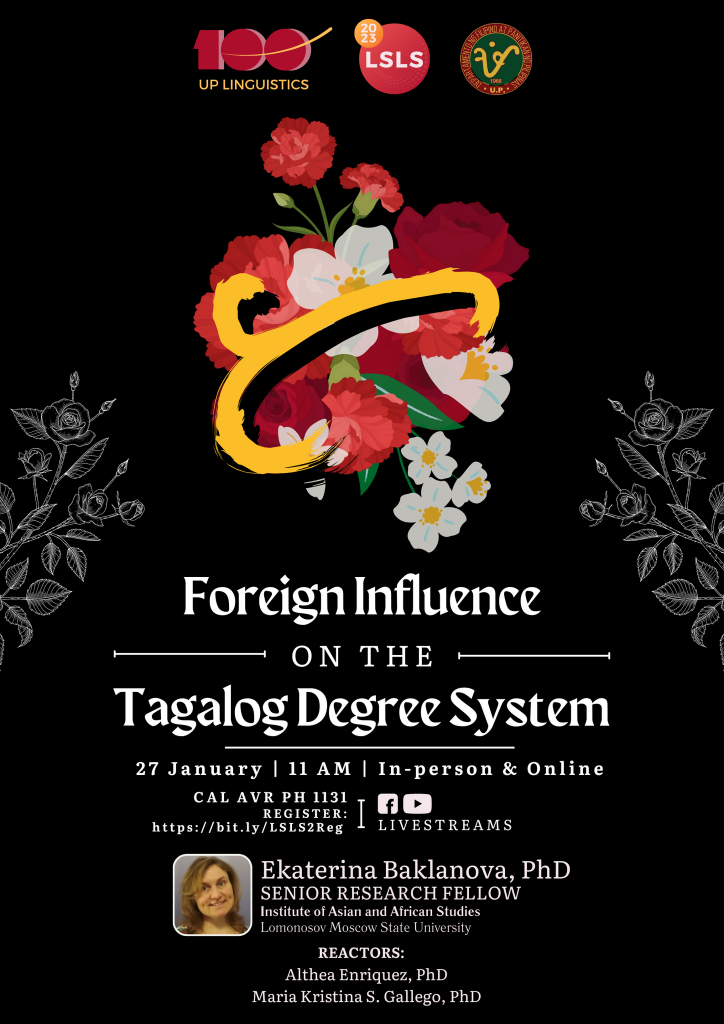 ABSTRACT
The impact of an intense Spanish influence on Tagalog from 16th to the early 20th century is manifested not only in the Tagalog lexica but also in its grammar. The Tagalog system of adjectival degrees in particular has expanded due to the Spanish borrowings as well as some recent English loanwords which leads to a partial restructuring of the degree paradigms.

A number of well-known works on the grammar of Tagalog (Schachter&Otanes 1972; De Guzman 1996; Malicsi 2013; Cena 2014) show differences both in approaches to characterizing the degree paradigm of Tagalog adjectives and in the scope of its inventory. Following the approach by Igor Melchuk (1998) I have attempted to describe this system as consisting of the adjectival paradigms of intensity category and comparison category. The impact of Spanish and English borrowings in these two paradigms has been analyzed based on the Leipzig Corpus of Tagalog (2017) ang a range of publications. It will be shown that the inventory of the intensity paradigm of Tagalog has been enriched with a Spanish-derived Moderative Marker as well as two Spanish and two English-derived Elative Markers. In the comparison paradigm which includes Comparative, Superlative, Equative, and hypothetically also an “Inferior” degree forms, Spanish Comparative marker mas prevails, while pareho/parehas has been adopted as another Equative degree marker. Along with the native Relator sa, two borrowed Relators kaysa and kumpara sa are part of the Tagalog comparison inventory. Finally, it is suggested that the use of mas as a double-marker in comparison of inequality may indicate a tendency to grammaticalization of mas towards a general “comparison of inequality” marker.

ABOUT THE SPEAKER
Dr. Ekaterina Baklanova is a Senior Research Fellow at the Institute of Asian and African Studies of Lomonosov Moscow State University (Russia), where she also obtained her PhD in 2010. Her major scholarly interests concern Tagalog linguistics, particularly language contact, contact-induced changes and morphology. Her research activities also include History of the Philippine Literature, Contemporary Philippine Literature and Malay Linguistics. Ekaterina Baklanova currently teaches Tagalog/Filipino Language, Philippine Literature and Linguistics at the IAAS of Lomonosov Moscow State University. She has publications in various journals and collections about borrowing and contact-induced change in Tagalog and some of its grammatical features, as well as about the Philippine literature and culture.