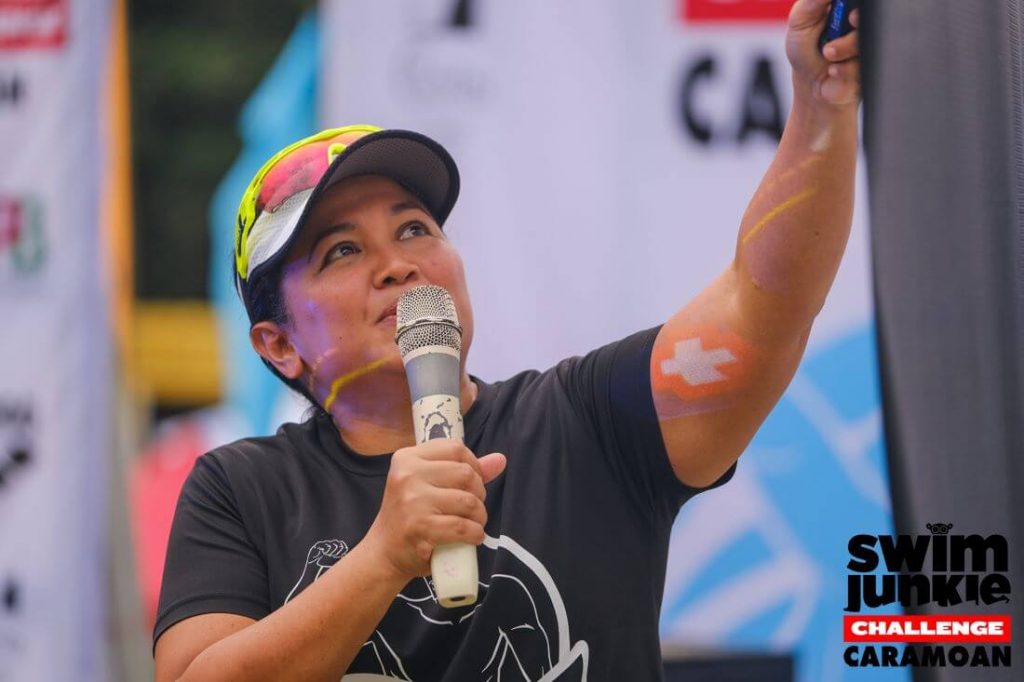 This past May, Chloe Isleta, Filipina swimmer and 2020 Arizona State University graduate, won gold in the 50-meter freestyle at the 31st Southeast Asian (SEA) Games in Hanoi, Vietnam. Before starting her sophomore year at Notre Dame, Manila native Jessica Geriane collected medals in Hanoi, too, including silver for a national record breaking 50-meter backstroke.

Two-time Olympic medalist and Canadian record holder Kayla Sanchez received her release from Swimming Canada this past June. In July, the Singapore-born, Canada-raised Filipina announced that she would represent the Philippines going forward.

Sanchez isn’t the only swimmer from the Filipino diaspora who has trained with or swum for the Philippines. Virginia native Remedy Rule gained dual citizenship to swim under the Philippine flag at the Tokyo Games. Australian-based Luke Gebbie was another Philippine National Swimming Team member present, breaking his own national 100-meter free record.

Before a dedicated open water swimming program existed in the Philippines, the country diverted domestic pool talent to 5K and 10K races in events such as the Asian Open Water Swimming Championships. But as the 2019 SEA Games approached, Philippine Swimming Inc. (PSI), the sole governing body for the nation’s aquatics, became more deliberate about developing specialized open water athletes. The competitions were to be hosted in Subic, Philippines, and a 10K marathon swim (male only) was on the schedule for the first time.

The entity invited Medalla to prepare two male national swimmers – Joboy Gonzales and Ron Jarius Villamor – for the 2019 SEA Games. Neither pool athlete had trained for a 10K before. With Medalla’s help, both attained personal records in the 10K at the Games after a 50-day ramp-up.

Now the official coach of the new Philippines National Open Water Swimming Team, Medalla is taking a ground-up approach to ensuring the sport’s future in the country.

She has effectively ended the borrowing of athletes from other events and is building a team that can focus and develop unity. Second, she aims to find her talent at home. She is convinced that the dearth of internationally competitive open water swimmers in the Philippines is not due to lack of interest or ability. There have simply have not been enough domestic open water events to give swimmers the training and exposure needed for long distance races.

“In the Philippines, there’s only one 10K open water race, and it’s mine,” Medalla says, adding, “we all know we perform better if we have a goal race in mind; we can’t just keep training without a goal.”

And when there are open water swimming opportunities, athletes need time to take advantage of them. Medalla would ideally begin working with swimmers when they are 14 to 16 years old. She cites the example of William Yan Thorley of Hong Kong, who came in third at a regional competition at age 13. Five years later, the bronze boy was at the Tokyo Olympics.

Medalla knows firsthand what it takes to meet the demands of long-distance open water swimming. In February 2014, the five foot and nothing mother of two, then 44 years old, became the first Asian person to complete the more than 7-kilometer journey from the historic Robben Island to Bloubergstrand Bay in South Africa. She readied herself for the wintery swim by sitting in tubs of ice and spending two weeks in mountainous Baguio City with training partner Julian Valencia to do laps in 10°C/50°F conditions.

Medalla and Valencia prevailed in their challenge, undertaken to express gratitude from the Philippines to South Africa for providing foreign aid after Super Typhoon Yolanda devastated the island nation in November 2013. The swimmers also broke barriers for the Asia-Pacific region, which contains 60% of the world’s population and the majority of the world’s marine environments, yet accounts for 61% of the world’s annual drowning incidents and remains underrepresented in competitive aquatics.

Medalla grew up in the capital city of Manila, where 50-meter public pools and swimmable natural waters were and still are limited. But Edward Kiunisala, Medalla’s father, was a natural born swimmer raised on the round Camiguin Island off the northern coast of Mindanao. He wanted his daughters to learn to swim, so as soon as the Kiunisalas could afford a home in the city, they bought a house with a 10-meter pool in the back.

All three Kiunisala sisters became competitive pool swimmers. Medalla was on the youth Philippine National Swimming team by age 12 and went on to captain the University of the Philippines swim team while majoring in Psychology. Upon graduation from college, she competed with the Philippine National Swimming Team before progressing into an international marketing career and having a family.

Gradually, Medalla’s commitments took her away from swimming. When she began cycling to reclaim her fitness, her friends suggested trying a triathlon and using her swimming aptitude as an edge. So it was that at age 38 in 2009, she entered her first triathlon at Subic. She jumped into the ocean for the 1,500-meter swimming leg but stopped short when the seabed dropped away and everything went black. She unfroze after a few people passed by and her competitive side kicked in. Her next thought was, I love this.

After coming in second in her age group at the triathlon, Medalla began helping Army/Navy South Triathlete club refine their strokes, posting videos with commentary on issues like low riding and bikers’ or runners’ kicks in the water. She began a blog called “Just Add Water” and voiced outrage when alums of the Philippine Science High School, her alma mater, secured government funds to build the country’s first indoor 50-meter pool in Quezon City and then left it fallow. (The pool eventually received repairs but never opened to the public as intended.)

Medalla’s activities gathered traction in the Philippines sports scene, garnering invitations to write for magazines and give swimming lectures. She transitioned out of corporate life and into full-time swim coaching, and went from being a former pool competitor to all-round open water athlete and event director.

What had borne Medalla through the hardest parts of her cold, sharky 2014 Robben Island swim were flashbacks to a family vacation in Caramoan, a peninsula with islets scattered like lush bon bons across a national park of limestone and coral reef lagoons.

By the time Medalla’s feet hit land, she was halfway there towards creating an open water challenge in her own country, an archipelago of 7,107 islands. And once back in the Philippines, Medalla partnered with the Camarines Sur province to host a swim race in Caramoan. Using components from FINA regulations and international triathlon standards, she authored an event protocol and assembled a robust safety staff.

After a successful inaugural event in October 2015, attendance for the Caramoan races grew exponentially, with a third of participants flying in from foreign countries. In June 2016, Medalla launched “VIP Challenge” of 2.5K and 5k races in Lobo, Batangas, held in the Verde Island Passage (VIP) known for shore-fish biodiversity, productivity, and mean currents. In April and May of 2017, Medalla added the El Nido 4K, 8K, and 12K races to the series that she named the Swimjunkie Challenge.

Before each event, the organizing team took to offering a dozen eggs and fruit baskets to the Real Santa Clara Monasterio de Manila in an appeal for good weather – the one element left to chance.

An open water swimming community formed around the swimming opportunities Medalla created, doubling as a force field of environmental stewardship raising awareness about issues like plastic waste and gold mining runoff. Race proceeds flowed to organizations like the SEA-VIP institution for Science, Education, and Advocacy in the Verde Island Passage and the Bantay Dagat civil organization of volunteer fishermen combating dynamite fishing and excess takes.

In 2020, the pandemic sent everything into a state of suspension but when the world started cracking open again, Medalla organized the Strong Shoulders series of 1.5, 2.5, and 3.5-kilometer swims to ease people back into the water.

A year later in 2021, she created the Philippine Openwater Swim Crossings Association (POSCA) to standardize and certify longer, tougher solo swims to be undertaken any time. A board of collaborators joined Medalla, including her sister Yvonne, a marketer knowledgeable about every aspect of swim event coordination.

Medalla tested a 3.5-kilometer crossing of the Maricaban Strait in February 2022 and launched the swim in March from the pebbly, tree-shaded beach at Planet Dive Resort, a cluster of old school villas with outdoor showers at the tip of the Anilao peninsula in Mabini, Batangas.

While the instantly popular crossings break for habagat – typhoon season – Medalla will be busy resuming the Swimjunkie Challenge with the Caramoan 5K and 10K swims this October 16th.

When not race directing or coaching, Medalla spends her time piloting uncharted courses at her own risk and often on her own dime. She envisions having a race in Camiguin to honor of her late father, her first swim teacher and respected investigative journalist. She wants to spark more events throughout the rest of the southern Mindanao region, too, once she figures out how to make travel costs and logistics more reasonable.

Medalla is applying the same grassroots efforts she has used to grow the Philippine open water swimming community to cultivate a new national team within it. She held the very first national open water swimming tryouts in June 2021. Twenty-seven candidates showed up, mostly from the southern provinces.

She recruited the first place male finisher, Joshua del Rio from Davao, and the first place female finisher, 17-year-old Hannah Sanchez, also an accomplished pool swimmer, from Manila. The third teammate to be cleared by the Philippine Sports Commission was Ron Jarius Villamor, 20, who competed in the inaugural 10K marathon swim at the 2019 SEA Games. Medalla needs two to three more swimmers for a well-rounded team.

The task that remains is to secure more corporate sponsorships. The kind of patrons necessary to pull off large scale events and an internationally competitive program long-term are committed to cycling, running, and triathlon events and athletes.

But even as Medalla vies and scrambles for sponsors, she is grateful to work with a leadership that supportive of her plans to develop a strong foundation for open water swimming in the Philippines so that the rest can follow. She is confident that the Philippines has the potential and the passion to become an open water swimming hub of the Asia-Pacific region and a generator of Olympic contenders in the sport.